CONTACT US We're here to help you get the perfect smile! 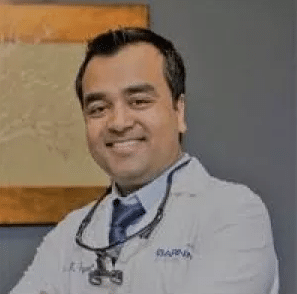 Dr. Dharam Tayal began his dental career in India, where he received his Bachelor of Dental Surgery (B.D.S.) at the prestigious Government Dental College and Hospital in Amritsar. Soon after, he traveled to the United States, where he received his Master of Science (M.S.) from State University of New York at Buffalo. Finally, Dr. Tayal attended the New York University College of Dentistry, where he earned his Doctor of Dental Surgery (D.D.S) and graduated with Honors in Esthetics. Since graduation, Dr. Tayal’s career in both dentistry and cosmetic dentistry has taken him to many offices in both the U.S. and abroad.

Dr. Tayal is also an active member of the American Academy of Implant Dentistry, the American Academy of Cosmetic Dentistry, and the American Dental Association.
Dr. Tayal’s impressive education and career history make him one of the top dental professionals – but that’s not the only reason we are thrilled to have him at Strategic Dental. He is also a dentist with a real sense of compassion for others. He is dedicated to providing his patients with quick, pain-free, and thorough care. He stays up to date on the latest and greatest dental cosmetic procedures (he is even an Invisalign-certified dentist) and works tirelessly to create the most beautiful smiles on every face he sees.

He also works hard to create a comforting environment for all his patients; he speaks English, Hindi, and Punjabi fluently and is happy to do what it takes to make his patients feel at ease during their appointments. When he is not in the office, Dr. Dharam Tayal enjoys traveling, hiking, and photography, as well as learning new languages and working on various software programs.

Dr. Tayal and the Strategic Dental Care team are always eager to give our patients the best dental experience possible. We hope you come to visit our esteemed dental professionals soon.

We want to welcome you to Strategic Dental Care in Orlando, FL. We’re ready to assist you and your family with your oral health care needs.